Sixteen gathered this past Sunday at Sew On-Sew Forth for another Sunday Sew. I managed to get a binding sewn on a Charity quilt that I am doing for the Webster Quilt Guild. I'll let you know more about that project in a future post.

There was all kinds of activity going on; at times it almost sounded like a sweat shop.
Here is a peek at a couple of the projects that people were working on.

One women was working on making yo-yos and appliqueing them on to beautiful blocks that already had some applique on them. 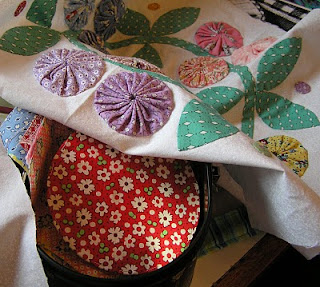 Here are just a couple of stunting shades of brown blocks that were being made. 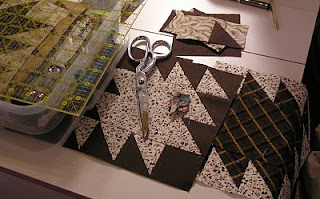 My friend Myra was busy paper piecing a wonderful wall quilt that she plans to hang in her Art Room. Myra does so many beautiful art projects - so she has an Art Room; not just a sewing or quilting room. This particular paper pieced wall hanging was on the cover of the November 2009 issue of American Quilter; it is entitled "Circle of Fire". I can't wait until Myra finishes it! 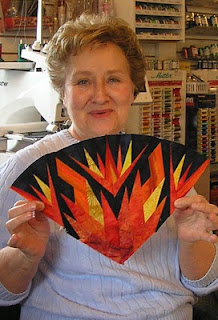 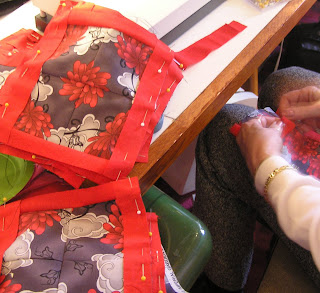 PJ, another quilter that was sewing on Sunday had two really terrific tips; although not necessarily quilt related.Her first tip was to place a small, very small amount of hot glue on the bottom side of a D-ring when constructing purse handles to keep the ring in place - so it doesn't turn on you. 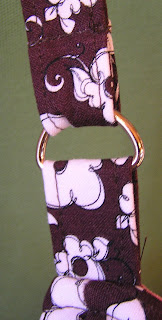 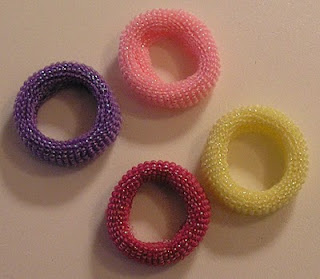 PJ places them on her bobbins to keep the thread on the bobbins from tangling up with everything else.

Other projects that were going on ranged from notebook covers to purses to piecing quilt tops and backs. It was a beehive of activity!

Be sure to find some time in the New Year to go and sew with others. I guarantee you that it will be a very rewarding experience. I not only got a binding on a quilt, but in the process I met some really nice people!

While I was out for a walk around the block I came upon these two cuties... 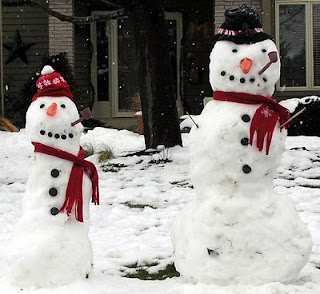 Then I walked a little further and saw this handsome man who had been celebrating New Years. 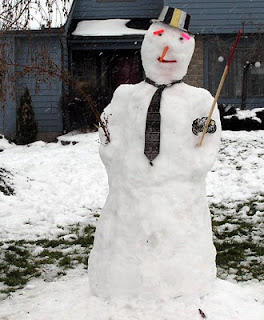 Thank you for all the wonderful support, comments and emails over this past year. I appreciate all of them. It has been fun meeting new people, reading old and new blogs and quilting some beautiful quilts for you. I wish for all of you that 2010 is full of happiness, prosperity, good health and many quilts!
Kathy
Posted by Kathy at 6:45 AM 4 comments: Blogs I Love To Read!